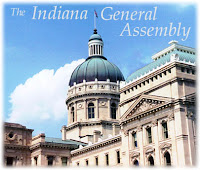 Welcome to the 7th edition of FV Indiana's Guide to the Legislative Session. This year brings a "long session" that began on January 7, 2013 and is expected to last through April 29, when a two year state budget will be set.  This session marks the first under the administration of Governor Mike Pence; also of political note, both the Indiana House and Senate maintain Republican majorities. This session will provide many opportunities for families to be involved, share your experience, and build relationships with legislators that will impact current and future decisions. This guide is intended to be a reference issue; in it you will find information on how a bill becomes a law, definitions and translations of acronyms and information on the House and Senate leadership. We encourage you to contact your legislators, make the effort to introduce yourself, share your perspective and continue to build a relationship. Watch FV Indiana and other sources for action alerts as the session progresses. If you have information about the session to share please call us at 317.944.8982 or email info@fvindiana.org.

Hot Topics for 2013
Medicaid
As Indiana makes decisions around the implications of the Affordable Care Act, Medicaid and its expansion promise to be hot topics.

School Reform
School funding and accountability, will be critical issues.  Families should be aware that decisions around restraint and exclusion will be a part of the education agenda.

Mental Health Services for Children
A Bill supported by the Commission on Mental Health and Addiction to allow prosecuting attorneys to determine if a child is a threat to themselves or others due to mental illness, and access department services without a claim of abuse is expected in the 2013 legislative session.

Child care
The issue of how the state should regulate child care centers, including religiously affiliated centers that receive tax dollars is likely to be considered

Music Therapy
Efforts to establish certification and licensure requirements for Music Therapist will likely be considered.

How a Bill Becomes Law
Legislation 101
Any legislator in either chamber (House or Senate) can initiate a bill on any matter. The Indiana Constitution provides that all appropriations and revenue-raising bills MUST originate in the House. To introduce a bill, a member files it with the Clerk. The bill is first read to the chamber, at which time each member has a printed copy to study. After the first reading, the bill is assigned to a committee. On the next legislative day, the bill is read for the second time so it will be ready for action when it comes out of the committee. Much of the "work" on a bill comes in the committee. Members of key committees, and particularly committee chairs, can be very influential in modifying the language of a proposed bill and determining whether or not it advances to a vote by the full house. Amendments (changes in the original bill) or even complete bill substitutions may be offered by the committee that studies the bill or by a member from the floor. Sometimes there may be several versions of one bill before the committee can agree. If a committee reports favorably on a bill (a majority of the committee votes for it), it is returned to the full house for a third reading and possibly further debate. Most bills passed out of committee are passed by the full house, but they may be altered, sometimes dramatically, or perhaps not voted upon at all.

Parliamentary maneuvers are sometimes very confusing to spectators, but these rules help to maintain order. Sometimes a bill's opponents can use parliamentary procedures to block a vote on a bill they cannot defeat or amend to their liking. Assuming that a bill survives such parliamentary maneuvers, the vote is taken. If a measure receives a majority of votes, it is passed and sent to the other chamber for consideration and goes through the whole process again. The second chamber can amend the bill, pass it as is or defeat it. If the legislation is amended, it is returned for consideration by the originating chamber. When the House and Senate disagree about amended portions, the presiding officers of each body appoint members to a conference committee which tries to find an acceptable compromise which must be approved in identical form by a majority of both houses. If the second chamber passes the bill without any changes, it is sent to the Governor, who can sign it or veto it. If he signs it, it becomes law; if he vetoes it, the bill "dies" and would have to be reintroduced another year unless the veto is overridden by the legislature, which is rare.

All bills vetoed by the Governor are sent back to the presiding officer of the house of the General Assembly where it originated with a list of reasons for the veto. The Governor's veto can be overridden by two-thirds of the votes in each house. When this happens, the bill becomes law. All bills introduced in the current session, as well as their current status in the process and any amendments, can be viewed on the state website at http://www.in.gov/apps/lsa/session/billwatch/

Take Action!
Advocacy Questions and Answers
How can I take action on legislation?
1. Form a relationship with your representatives and senators by calling, emailing, faxing, and scheduling meetings to tell them about how their decisions on the budget and laws affect the quality of life for you and your family.
2. Consider focusing your efforts on key issues such as the Medicaid services, ensuring that any plans for K-12 supports inclusive education practices or First Steps issues.

How can I contact my state representative or senator?
Every member has an email address and an office phone number at the statehouse. The most effective ways to communicate are by personal contacts, be they emails, phone calls or face-to-face meetings. Legislators prefer to hear from their own constituents directly and may not pay attention to mass emails or form letters, especially from people outside their districts. Many legislators even invite constituents with concerns to contact them at home or via cell phone. Information about legislators is available on the state website at http://district.iga.in.gov/DistrictLookup/

How do I contact other state agencies?
The State of Indiana website is found at: www.in.gov and contains links to all state as well as many federal and local web resources.  Many State Agency and programs have email newsletters that you can sign up for on their Website, these are a great way to get up to date information about the agency.

The Arc of Indiana
http://www.arcind.org/legislative_information_page.htm
Information on the Arc's legislative agenda and general legislative information including link to sign up for action alerts.

Popular posts from this blog

May 13, 2020
Pandemic Snap benefits: Those that have children on free and reduced lunch will receive their EBT card in the mail by the end of May if you are not already receiving SNAP benefits. It will be $319 per school aged child. You do not need to apply for this benefit. The DOE will provide your information to FSSA. https://www.in.gov/fssa/dfr/ 5767.htm?fbclid= IwAR0zhdr9tS1wMovtNNPngc55HCms QSX_4k_E_ GRAjPpNRHWF5ExZgCLUjOE
Read more

January 28, 2015
From The Arc Autism Insurance Project in collaboration with Family Voices Indiana and About Special Kids Feel free to contact Family Voices Indiana at 317 944 8982 or info@fvindiana.org if you need additional resources or support. Sample Medical Order, Letter of Medical Necessity and Appeal Letter for ABA Services – Medicaid under EPSDT (ages 0-21) EPSDT – Early, Periodic Screening Diagnosis and T reatment MEDICAL TREATMENT ORDER SAMPLE FORMAT The prescribing physician should include: Physician’s order for ABA therapy Letter of medical necessity written by the physician or ABA provider, which includes: Patient history Diagnosis and prognosis Description of recommended services and explanation of why the services are medically necessary What the benefit to the patient will be, and Recommended length of time for the services Medical Necessity According to the Health and Human Services website: Medical Necessity under EPSDT   In a rep
Read more

Family Voices Indiana
Family Voices IN is a family-led organization that provides information, education, training, outreach, & peer support to families of children with special health care needs & the professionals who serve them. Learn more at www.fvindiana.org

Family Voices aims to achieve family-centered care for all children and youth with special health care needs and/or disabilities. Through this national network, Family Voices provides families tools to make informed decisions, advocates for improved public and private policies, builds partnerships among professionals and families, and serves as a trusted resource on health care.

To learn more about the national initiatives of the National Family Voices, please visit the Family Voices website.

You can reach FV Indiana at: